My personal experience as a high school student was marked by struggling through the core subjects and excelling at non-core topics. Rather than relying on getting good grades or being accepted into social cliques in order to have fun, I frequently made my own entertainment instead. In addition to the typical pranks and social outlandishness that made many teachers cringe, I was regularly found “doing my own thing” and leading my peers in ways that made teachers uncomfortable. The most overt way I did this was through N.E.A.T.

Earth Day celebrated its fifteenth anniversary when I was in tenth grade. Reeling from the barrage of pro-environmental media coverage surrounding me, one day I went to my science teacher and asked how I could join the environmental club at my school. She quickly informed me it was only for honors students, and since my grades were too poor and I was not in her honors science classes I could not join. Determined to do something to help the neighborhood where I lived (which was later declared a Superfund environmental cleanup site by federal Environment Protection Agency), I worked with my friends to launch our own club. The honors students at our school were bused in to participate in the school’s magnet science and math programs, and we soon discovered their environmental club projects were focused on the parts of the city where they lived and not the neighborhood where our school was and where we lived. Working with a group of friends, we decided our club would address local problems. We came up with a catchy name—North Environmental Action Team, or N.E.A.T.—and wrote a three-page manifesto, and then solicited all our favorite teachers to see if they’d sponsor us. When none responded, we asked every other teacher in the building. When none of them responded, we asked everyone again, and particularly the science teacher, who huffed a resolute, “No.”

So, we decided to start our club unofficially. Never gaining an official adult sponsor, N.E.A.T. operated sporadically over the next three years. Our consciousness-raising antics were designed to upset the adults in our building who we thought failed to support us, and we generally succeeding. After creating an Earth Day card that year of recycled cardboard for the school principal, we collected more than 500 signatures from students in the building, or one quarter of the school population. The next year we regularly dumpster dived for pop cans and set them in front of the school with a placard that said, “We Love Mother Earth. Signed, N.E.A.T..” Our final year a few of our members, including myself, were suspended from school for graffiting earth-friendly messages on the outside of the building for Earth Day.

I shared a lot of it myself when I was young, as many of the most dedicated educators have—because we all want to be acknowledged. The real inconvenience of my experience as a student was that I didn’t believe I needed to be heard. Instead, I just wanted to get the words, art, and action out of me, no matter what. Sure, somebody spent time painting over school property after I tagged it, and taxpayer dollars were spent cleaning up the messes I made after I made them. Like many students, I was not thinking about it—instead, I was taking action and just doing it.

Committing to Meaningful Student Involvement throughout education means working with inconvenient student voice to discover, create, explore, and examine new ways to engage disengaged learners, and new ways to make inconvenient student voice constructive, if not always appreciated or deemed appropriate by everyone involved. (Fletcher, 2012) Research conducted by Mitra (2004) and others supports my experience, too, showing that educators can engage the disengaged through Meaningful Student Involvement. 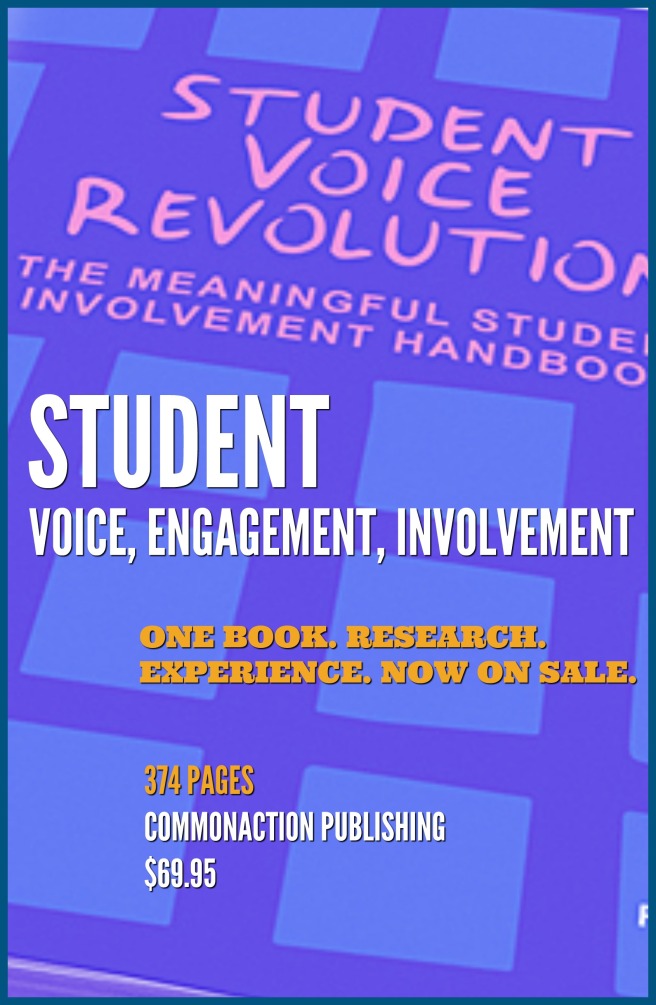