Introduction: Activity for 8-40 students and/or adults

Goal: When this session is complete, participants should be able to…

Space: Outdoors, with some variation in terrain

Considerations: This activity has the potential to cause great strife within a group as it involves functioning—or, more accurately, dysfunctional, under both pressure and physical strain. You will want to debrief the activity carefully if strife is evident. Also be prepared for possible anger directed at you as a facilitator. With all that said, this activity is an excellent metaphor for how a project comes together and the difficulties encountered.

NOTE: Call any specific behaviors to attention and ask what was going on. 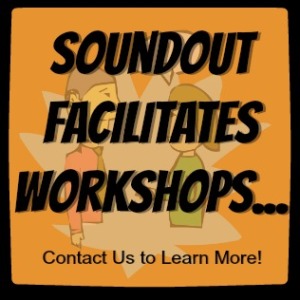 All this and more is covered in the time-tested, student-approved SoundOut Workshop Guide for Student/Adult Partnerships!